One of the more notable things about the season finale of “Girls” last Sunday night is that Hannah Horvath kept her clothes on. There was no mesh T-shirt, no exposed belly buttons, or ill-fitting jumpers on display. I’m OK with that because although the series as a whole wasn’t about flaunting your nudity. Rather, “Girls” is the millennial’s answer to SATC, and a refreshing breath of realism. That said, I did study each character’s personality and fashion picks like they were living in my reality.

The character’s wardrobes reflect their new experiences, sexual and otherwise, and a dichotomy that Rogien, the show’s costume designer, says is important to the show. There are two threads: the people who really have an identity, visually, in their young 20s, and the people who are exploring their identities. Hannah and Jessa (Jemima Kirke) are very much exploring, and Marnie (Allison Williams) and Shoshanna have a very clear idea of how they want to express themselves.

Hannah’s crop tops and haphazard fashion sense are not for the faint of heart or anyone over the age of 35. Jessa with her pink velvet dresses, lacy baby-doll dresses, and tattoos are so generational, and although I can relate to her, I’m just not that into her dress code. Marnie is just too Lord and Taylor and Ann Taylory for my liking. But Shoshana would over think her outfit, find some point of reference–perhaps a combo of Kate Middleton and Carrie Bradshaw–and maybe she would try out a fascinator. Would she shop on Etsy? She doesn’t really seem like a second-hand type of gal. Then again, she does seem like someone who would spend a lot of time on Pinterest.

Through all of her sped-up frantic thoughts and opinions, it turns out Shoshanna might have the clearest head and to me, the smartest style of any of the characters. Love her look? So do I. Here’s a sample collage of what she would pick out on a shopping spree or out of her own closet. 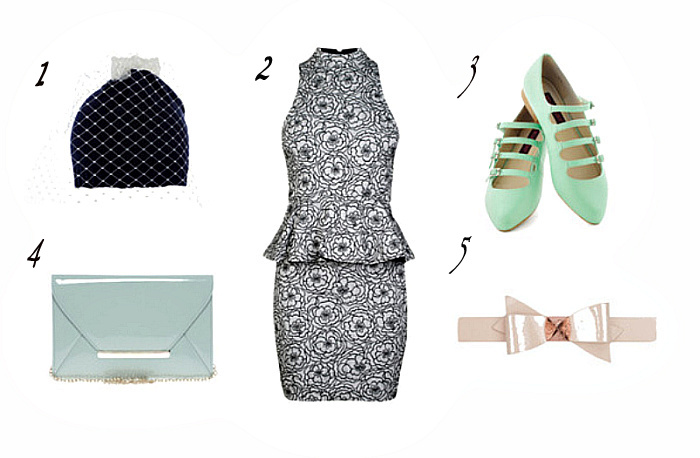 2. alice and olivia sleeveless peplum dress, get a similar one by Tibi here or this cool navy one by Kenzo

Watch this clip, courtesy of Vulture, an on-point compilation of the wit and wisdom of Shoshanna Shapiro and, like, discover the meaning of life or something.

We now know that Season 3 casting is well under-way. Who can’t wait?