Kicking off this Monday on a high note as tonight I am going to see Queen Bey perform tonight at Barclays Center. Based on hearsay and tweets from last night, Beyoncé’s vocals on the The Mrs. Carter Show World Tour are so pristine live, she could sing while standing still for two hours and get standing ovations. But Bey isn’t just the Voice; she’s also the Body, the Hair Flip, the Don’t-F*ck-With-Me Snarl. But you already know that.

To celebrate the imminent concert, I put my brain on high drive to imagine the outfit that I don’t own, but wish I did. Taking that thought a bit further, what does one wear to a Beyoncé concert?

Bad-ass bodysuit? Check. Smokin’ shoes? Check. Lot’s o’ fake lashes? Got those. I know she is going to appear on that stage in an intricately iced-out onesie that is going to knock my socks off. Here’s to the 20 outfit changes and the lady whose got it going on. In this case, it’s go big, or go home. 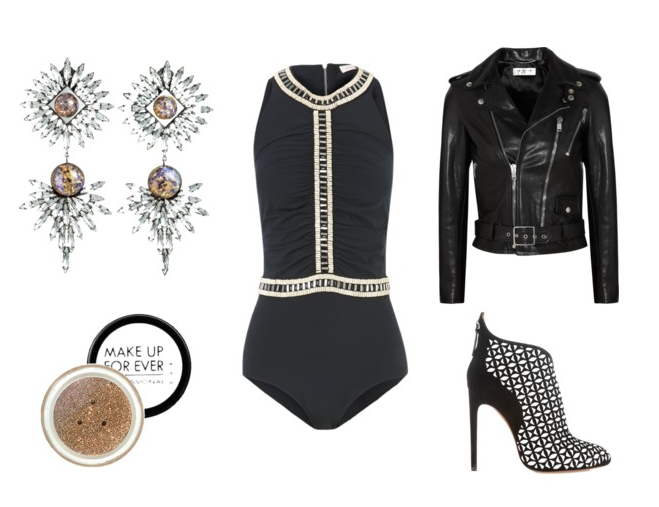 Dannijo Nora earrings, Makeup For Ever glitter, an All-Saints Bodysuit, Saint Laurent biker jacket that will be worn way past tonight, and Alaia laser-cut out dancing booties for the women who rock.

Beyoncé stands as a human testament to the ability to achieve perfection, whose “BeyHive” of fans has come to revere her for her poise and benevolence as an individual, her virtually unmatched capabilities as a singer and her unflappable precision as a performer.

Her choreography is pristine, and her confidence is punishing. Don’t forget, this is a woman whose mane got caught in a fan at a recent show and she still never skipped a note.

A revolution has begun. Cuz who runs the world? Girls!