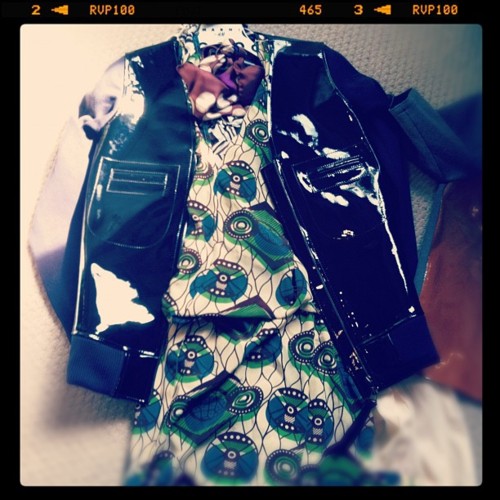 Yesterday was the Marni for H&M launch and it seemed like forever and a day ago since I originally posted this back in January stating how excited I was to  and shop another designer collaboration with a mass retailer. But this one was different. I have always been a fan of Marni’s quirky and offbeat stuff ever since I can remember. My love affair started with her big chunky necklaces and bracelets but the problem for me was always the steep prices. I just couldn’t justify spending over $800 on a resin necklace tied together with ribbon that I felt I could make myself.

The sale went live at some H&M locations at 8am with shoppers given wristbands once they got on line to receive their 15 minutes to shop for their goodies. I knew from Wednesday night’s Twitter-sphere that things were going to sell out quickly. Racked tweeted, “Despite the lines, the Marni x H&M launch is much less crazy than Versace x H&M.” Somebody tweeted that Paris shoppers were trying to pull items off mannequins as were editors in New York. But the reality actually exceeded the hype. Besides camping out on the streets of NYC 12 hours before the store even opened, some of the shoppers stole goods right out of my hands. People also bought thousands and thousands of dollars of merchandise to re-sell it on eBay. The whole thing was so dramatic. Its really only…stuff! Before the sale, I was eyeing printed silk pj shorts, and a white sequined-collar necklace but when it came time for my turn in line, I didn’t get what I was pining for. But alas, I did score a printed dress, a leather shirt which I love, a jacket, a scarf, socks, and a pair of flats. While the pieces are way less expensive than regular Marni garb, they’re not exactly dirt cheap, either. Watch my 3 minute video below to see my swag and tell me what you think– I like opinions.